Caducity by any other name…

What do you call it?

While caducity is the title of this blog, it is not a widely known term. In my writing, I will typically refer to the issues faced by my loved ones as ‘dementia’.

Per the Alzheimer’s Association: www.alz.org

“Dementia is not a specific disease. It’s an overall term that describes a group of symptoms associated with a decline in memory or other thinking skills severe enough to reduce a person’s ability to perform everyday activities. Alzheimer’s disease accounts for 60 to 80 percent of cases. Vascular dementia, which occurs after a stroke, is the second most common dementia type. But there are many other conditions that can cause symptoms of dementia, including some that are reversible, such as thyroid problems and vitamin deficiencies.

Dementia is often incorrectly referred to as “senility” or “senile dementia,” which reflects the formerly widespread but incorrect belief that serious mental decline is a normal part of aging.”

In 2013, the American Psychiatric Association changed the medical terminology describing dementia…much to the confusion of the rest of us. Now “[m]ajor neurocognitive disorder, known previously as dementia, is a decline in mental ability severe enough to interfere with independence and daily life. This term was introduced when the American Psychiatric Association (APA) released the fifth edition of its Diagnostic and Statistical Manual of Mental Disorders (DSM-5).”

Regardless of what causes the dementia, its symptoms, though wide-ranging and sometimes intermittent, invariably increase in frequency and intensity. These fluctuations are what cause the most frustration for the dementia sufferers (DS) as well as their families and caretakers. For the most part, human beings can cope with changes when they bring about a new level of constancy, even if that new level is worse in terms of capability on the part of the dementia suffer. When your DS forgets one day how to put on his shirt, but recalls the process a few days later, you can cope. If your DS simply never again remembers where the car keys are, then you can cope. There are actions and tools to locate car keys. When your DS can no longer remember your name and who you are, it becomes much more difficult to cope. The pain of the fluctuation in symptoms of dementia, both mental and physical, both for the sufferer and others can be unbearable.

Therefore…caducity by any other name is heartbreaking.

This site uses Akismet to reduce spam. Learn how your comment data is processed. 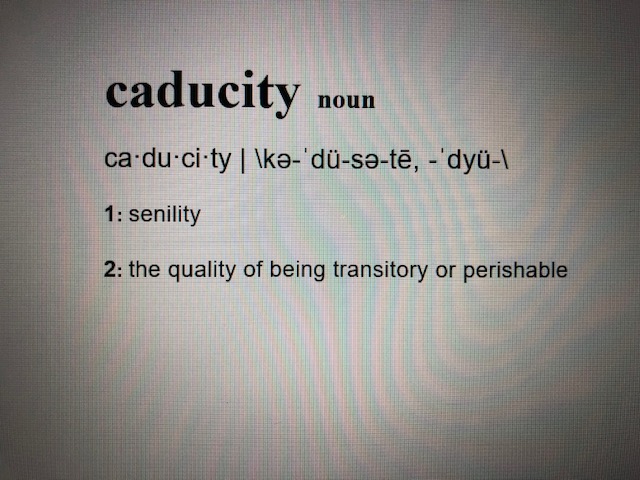 stories about English language and people in Asian communities in America and in Asia.

Exploring life as an "elderly" person

"I'm not an expert on Alzheimer's disease, but I am an expert on loving someone who has it." - Lauren Dykovitz

a blog about stuff